Kensington Palace is a luxurious Royal residence that has become one of the most popular tourist attractions in the UK. Here, you can discover more about its fascinating 400 year history.

William III and Mary II disliked living at Westminster Palace near the River Thames as its damp atmosphere aggravated the King’s asthma. In 1689, they decided that Nottingham House, a small Jacobean mansion built in 1605, was the perfect residence. It was located in the clean, fresh air of the countryside on the outskirts of London, but it also provided easy access for their courtiers in the capital.

** From Small Mansion to Luxurious Palace

William and Mary immediately commissioned the famous architect, Sir Christopher Wren to transform the mansion into a beautiful palace, but they wanted the work completed in a very short time. Sir Christopher’s solution was to keep the original mansion intact and extend it on all sides. On each corner, he built a three-storey pavilion and added the courtyard with its distinctive clock tower. The surrounding gardens were landscaped with ornamental flower beds. In just a few months, William and Mary could move into their new home. In 1704, Queen Anne added the magnificent parterre and the large banqueting hall known as The Orangery. The luxurious State Apartments and the Cupola Room were commissioned in 1723 by King George II. These ornately decorated rooms with beautiful painted ceilings and golden pillars are particularly impressive and very popular with tourists.

Queen Victoria was born at Kensington Palace in 1819. Today, visitors can admire some of the toys she played with, including her beautiful dolls’ house. In 1837, it was in the elegant rooms of the palace that eighteen year old Victoria was informed that she was now the Queen following the death of her favourite uncle, William IV. Thirty years later, Princess Mary of Teck was born at Kensington Palace. She married King George V and eventually became the grandmother of the present Queen, Elizabeth II. 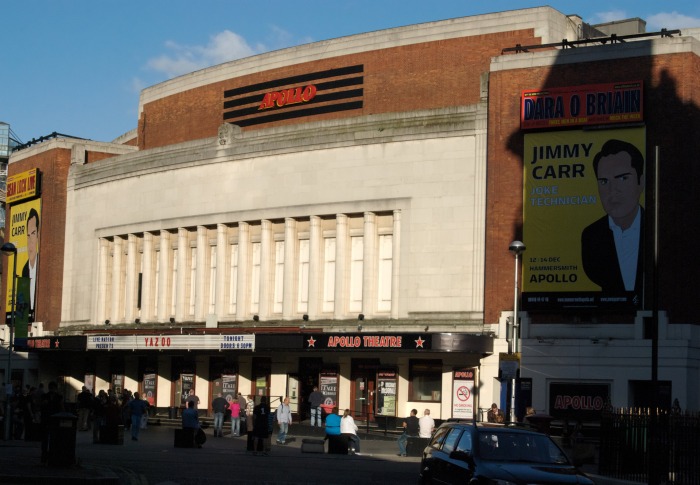 In this article we are going to provide a brief history of the famous Hammersmith Apollo theatre in London and explain why it has achieved an iconic status among the capital’s arts and culture attractions.

A Thoroughly Modern Venue With a Great History

Originally opened in 1932 as the Gaumont Palace Cinema, the site now known as the Eventim Apollo has undergone much transformation over the course of nearly a century. Located in the borough of Hammersmith in West London, this stunning example of Art Deco design was envisioned by architect Robert Cromie, also famous for designing the Prince of Wales Theatre in Central London.

After becoming prominent for staging various productions in the first half of the 20th century, the venue was rebranded as the Hammersmith Apollo in 1962 and began building an extraordinary legacy, hosting performances by the likes of The Beatles, Bob Marley, and The Rolling Stones. Also intermittently showing film releases during this time, the final motion picture to be screened at the Apollo was in 1984, being Blue Thunder starring Roy Schneider.

The venue underwent yet another rebranding/spondorship in the early 1990s, becoming the Labatt’s Apollo for a period of time, before changing once again to Odeon. It wasn’t long, however, before the theatre reverted back to its familiar and popular Hammersmith Apollo moniker, and during this time it was also designated as a Grade II listed building by English Heritage.

No matter the name of the venue or the time period, one thing that has stayed consistent with the Hammersmith (currently Eventim) Apollo is the stunning Art Deco architecture and classical atmosphere. Over the years, certain refurbishments have taken place with a particular focus on maintaining the original period beauty of the theatre. A particularly prominent phase of refurbishment was undertaken by award winning architect Foster Wilson, in which ornate plasterwork was restored, historically accurate decorations were added, and two old marble staircases were revived.

After all this time, the Apollo remains one of the most prominent and high profile theatre venues outside of Central London and the West End. Some more recent performances have been given by the likes of musicians like Billy Joel, Nick Cave & The Bad Seeds, and Paul Weller, as well as comedians like Jason Manford, Sean Lock, Jimmy Carr, and Russell Brand. The Apollo’s stellar reputation shows no signs of slowing.